Cartridge razors are the blueprint of modern razors, made for convenience and for men who are always on the go. But is it the best even over its traditional counterpart? We’ll let you know which is better between straight razors vs. modern razors.

To put things in proper perspective, we’re going to list the differences between the straight razor and these so-called revolutionary designed cartridge razors.

Things you need to know:

What is a Straight Razor? A straight razor is a single-edge blade notorious for its cut-throat sharpness and ability to give the closest shave.

A straight razor is a traditional type of razor featuring a pivoted design wherein its narrow single-edge blade folds back into the handle when not in use. The blades result from forging, hardening, grinding, and sharpening of primarily Japanese steel, stainless steel, carbon steel (DOVO razors for example), or sometimes Damascus steel blanks.

The blades come in different points and grinds,1 defining their shaving efficiency. Straight razors with a rounded point and hollow ground are easier for beginners as they do not have a spear-like tip and the concave on the bevel allows the shaver to angle the blade for a close shave.

You can trace the history of straight razors back to ancient Egyptian civilization,2 where they originally wore a fixed handle. It was only in the 1600s to 1800s when the design took on another form when the first folding razor became popular in Sheffield, England, with the Butcher Bros as some of its pioneers.3

Only barbers were allowed to use these straight razors in olden times because the blades made them notorious as cut-throat razors. Professional barbers used straight razors in their dual role as surgeons and as barbers, where they had to undergo training as a barber’s apprentice to use the razor.4

What are Modern Razors?

Unfortunately, since straight razor shaving required professional skill at that time, it was not a preferable choice for a convenient and on-the-go tool. A safety razor have a single-edge or double-edge disposable blade that gives a close shave with an easier learning curve than a straight razor.

The need and demand inspired inventors like Jean-Jacques Perret, William Henson, and Kampfe Brothers to design and introduce the safety or t-shaped razor, which propelled the idea behind the modern era cartridge razor.5

A safety razor is a re-envisioned version of a straight razor with a hoe-shaped design. The handle is placed perpendicularly to the head, which houses a replaceable single-edged blade similar to a straight razor’s blade but smaller. There are also more modern renditions, the double edge safety razor, which caters to double-edge blades.

The original design of safety razors called for single-edge blades,6 which are stiffer, heavier, and last longer than the double-edge ones. The two cutting edges of a DE makes up for its thinner features.

The safety razor owes its distinct and defining quality to the safety bar and combs, which lessens the exposure of a blade’s cutting edge. Therefore, accounting for a safer shaving experience. Cartridge razors have replaceable heads and are easy to use.

In 1895, American businessman, King Camp Gillette, had an idea to use the safety razor’s design but with a removable head or cartridge. Then, in the 1970s, he materialized the idea and developed the cartridge razor that was marketed as an improvement to the safety razor.

Gillette's pioneering cartridge razor Trac II was the first of its kind and a complete turnaround from how razors before the 20th century were built.7

The first cartridge razor is ergonomic in shape in both handle and head and usually has more than one blade tucked into a pivoted cartridge. This design keeps the blades at a predetermined angle through the shaving motion, making it convenient and easy to shave. When the blades get dull, the cartridge head is removable, ready for a new and fresh one to replace.

These days, razor companies try to outdo each other by raising the number of razor blades in a cartridge head. According to them, the more blades, the closer the shave.

The cartridge razor is a popular shaving tool that spearheaded the era of disposable blades and razors. Today’s disposable razors contain multiple blades with a plastic handle and often lubricating strips. Their blades only last at least six shaves before being disposed of. A safety razor has more benefits to offer than a cartridge razor.

Before delving into the straight razor vs. modern razor debate, we should also first discuss how different safety razors and cartridge razors are from each other.

Many wet shaving enthusiasts have polarizing opinions on safety razors against cartridges. DE blade aficionados are keen on debunking cartridge razors' advertising and marketing shenanigans, arguing that multiple blades do not necessarily mean a closer and better shave.

We took a deep dive into several razors and shaving forums,8 and here’s some info that makes sense about shaving with safety razors vs. cartridges:

The only pros of shaving with a cartridge razor is that it has an excellent error tolerance, and it is everywhere. Beginners do not need any learning curve, and they can easily buy replacements wherever they may be. But, if you have sensitive skin, lubricating strips on these modern razors will not significantly lessen the harm they will impose. The takeaway on cartridge vs. safety razors is that single blades are better than multiple blades because they shave closer.

But, how much is the difference between traditional straight razors vs. modern razors in general?

For straight razor users, however, a single blade is all one needs to get a close shave. In fact, they find the multi-blade design ridiculous and a transparent attempt for razor companies to dupe consumers into buying them.11

Straight razors are produced to last, often becoming heirlooms passed down from father to son. If it’s a high-quality straight razor, it will be more valuable over time.

The downside to a straight razor? It requires time and skill. Maintaining a straight razor requires stropping the blade on a leather strop and honing it occasionally. One needs to spend time learning how to do it properly and regularly so that it remains its sharp blade.

For straight razor purists, though, time is something they’re willing to spend just so they’re able to get the closest shave that a straight razor can give. In fact, it’s the one thing that elevates the shaving routine into an art form and a masculine ritual. Having some “Me Time” shaving with a straight razor every morning does wonders for one’s outlook for the day.

Convenience of a Cartridge Razor

But for those who want to cut to the chase, a cartridge razor is their go-to and best razors for wet shaving.

In fact, that’s how razor companies are marketing them. Cartridge razors give a quick and easy close shave comparable to a straight-edge razor. Gillette calls this the “hysteresis process”15 where the multi-blade cartridge creates a comfortable and smooth shaving experience for the user.

It’s a quick way to achieve a close shave, made easier because it is designed without the user needing some skill to shave. It doesn’t even require maintenance; once the blades become dull, just replace the cartridge head with a new one. Naked Armor’s Solomon Straight Razor is made from a Japanese Steel blade and algum wood handle, giving you the perfect balance you need to achieve a close shave with less chances of getting nicked.

Between straight razors vs. modern razors, like cartridges and safety, straight razors give a better shave overall, despite the learning curve. The single-edge blade without any safety bars lets you see the correct angle you need for a skin-level shave without the risk of imposing too much irritation.

Ultimately, though, it’s all a matter of your personal preference, newbie.

Nothing beats using a cartridge razor for that first experience in shaving. However, as you adopt a regular shaving routine throughout the years, your shaving needs will also change. You will need a more versatile tool than a cartridge razor.

Here at Naked Armor, we have a fine selection of straight razors that will make your shaving experience easy, comfortable, and luxurious.

Our razors are made with high-quality Japanese steel, with durable wooden handles sourced from sandalwood, one of the world’s most valuable timbers.

Meanwhile, the Solomon Straight Razor, with its hardness rating of 61-65 HRC, is designed to be a hybrid of a full hollow and a half hollow to make sure that we capture all the best aspects of razor shaving.

If you’re looking for a kit that gives you all the shaving essentials you will need, click Add to Cart to get started on your wet shaving experience.

What She Really Thinks About Men’s Hairy Butts—We Asked Her!

How Long Does Razor Burn Last?

How To Sharpen A Straight Razor By Honing & Stropping

Naked Armor is a family business, run by wet shave enthusiasts inspired by my father.

A portion of your purchase helps feed the hungry in America in honor of my uncle that died on the streets.

I have been using the Solomon for about a week now an it is beautifully balanced, an came perfectly sharp out of the box. 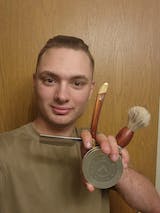 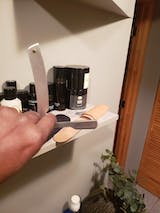 They are well made and attractive. I would recommend the King Arthur, but Damascus for some reason doesn’t hold its sharp edge. I’m not saying it’s not a good razor it may not be right for me. 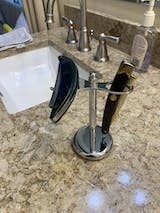 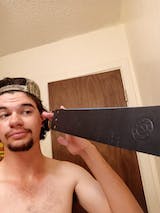