Military mustache has long been a statement for service members. But for American troops, it can be bad news. Hence, if you are planning to join the United States Armed Forces, start practicing how to get a military shave—with our help, of course!

Every third Saturday of May, America celebrates Armed Forces Day. It is a day to honor our gallant men and women serving in all five military branches.

During this day, we highlight the military's role in keeping the peace, and we honor the bravery and dedication of all those who have served and continue to serve in the Armed Forces. It is also a day for the military to showcase its top-of-the-line equipment and skills in protecting this great nation.

To mark this celebration, Naked Armor takes this occasion to highlight one of the fundamental aspects of military life—at most minor for enlisted men—and that is the Military Shave.

What is the Military Shave?

At its most basic, a military shave is simply the kind of quick shave that one does when serving in the armed forces. Before, for other nations, shaving above your mouth can get you in jail.

The modern US military tends to expect male soldiers to be clean and presentable at all times, even when in the field. And when it comes to grooming, they expect them to be clean-shaven.

It is explicitly written into their manuals. For instance, the US Navy’s Blue Jacket Manual says:

“You should be neat, clean, and presentable at all times…. Beards are not permitted except when medically authorized, and then only until the problem clears up. If you wear a mustache, keep it trimmed and neat. Don’t grow your mustache below the top line of your upper lip, and do not allow it to extend more than 1/4 inch beyond the corners of your mouth.”

That is why every morning, members of the military include shaving in their routine. Showing up with a 5 o’clock shadow will result in a dressing down from their superiors.

Outside of the armed forces, the number of barbershops offering the military shave as a grooming style has been increasing nationwide. It is still a quick shave, bordering under five minutes, but it gives you an ultra-minimalistic shave that will have you looking sharp and presentable.

Hix Magazine credits Italian master barber Joseph Abbatangelo for developing this technique. He created this to market his shaving gel, which he said must be used for this technique rather than standard shaving lather.

Whether or not you decide to buy into his pitch, the characteristics of a military shave remain essentially the same: it is a no-fuss and quick shave that gives you a clean-shaven mug to get you through the day—the polar opposite of the infamous military mustache that dictators of the past proudly wore.

Why Did the Military Require Men to Shave? There are a bunch of reasons why military men are advised to have clean-shaven faces—one of them is for effective performance.

Military men didn’t always need to have clean-shaven faces. It all started during World War I, but all for a good cause.

But above everything else, a military shave was also for fostering military discipline. When the troops look all the same, they can function more efficiently as a cohesive unit.


History of the Military Shave

As a tradition, however, shaving in the military has roots that go far back before World War 1.

The most famous account is when Alexander the Great told his men to shave off their beards before the battle. Then again, in the days of the Early American Republic, regulations required Army soldiers to shave three days a week, primarily when they were stationed in the garrison.

Military mustaches were also disallowed. Before the Civil War, only soldiers assigned to cavalry regiments were allowed to wear one.

By the time the Civil War rolled along, regulations had allowed senior officers in the Army and Navy to wear beards and mustaches. But the rules stressed that the facial hair is kept short and neatly trimmed.

When World War 1 came along, with its new and deadly methods of warfare, the military had to adapt and went back to shaving it all off, a tradition that continues to this very day.

Critiques Against the Military Shave One of the reasons why people are against this shaving regulation is the fact that it might cause razor burns, rash, and nicks.

“Shaving is uniform. Shaving is discipline. Shaving is regulation,” as Fred Schlim, a United States Army Veteran Captain, answered on this thread in Quora. Despite that and all the practical reasons why a military shave is necessary for enlisted personnel, there is the occasional complaint against it.

However, many troops seem to be unhappy with the outworn policy. Back in January 2021, after officials announced new Army hair and grooming standards for women, a petition on Change.org, calling for the rights of service members to wear beards, garnered more than 100,000 signatures.

If women were allowed to wear earrings, ponytails, and nail polish alongside their uniform, Ryan Belanger, a commenter on the petition, said, “let's have some equality and make men masculine again.”

Also, razor bumps, which are pesky skin condition results from hair strands growing inward into the skin layer, are a common complaint against shaving.

Among African-American enlisted personnel, razor bumps are a common problem. That’s because their hair is curly and often tends to grow inward. The condition is painful and itchy. That is why most men with curly hair tend to avoid shaving and instead wear their beards long.

For military personnel, however, that is not possible. But there are ways to get around this rule. One way is to get a no-shave kit.

It is like asking the army physician to certify the soldier for an exemption from shaving because the razor bumps have become a severe medical condition that needs to be treated.

The only hitch is, it’s not easy to get one.

So What’s the Best Razor to Use for a Military Shave? Straight razors have single blades which means that there is lesser friction, thus, lesser chances of getting rash and burns.

Simply put, a straight razor is best for a military shave. It reduces the incidence of razor bumps because it only has a single, sharp blade. There are no extra blades that can tug curly hair and force it even to grow inward.

Straight razors can cut cleanly because they are high-grade steel with a very sharp edge. This means that blade friction will be lessened so that the skin isn’t irritated.

In the early days of military shaving, though, straight razors were the preferred tool to use when shaving. That’s before Gillette came in and saturated the market with its multi-blades. There’s a demand for army vintage razors these days. Not only are they valuable heirloom acquisitions, but they also give any modern multi-blade cartridge a run for its money.

How to Do a Military Shave?

Lucky you because you will not have to sport a quintessential military mustache, but sadly you cannot grow a beard too. A clean-shaven face is always a good look, but only if you shave it the right way.

Once again, we take our cues from the Abbatangelo method:

See, it’s quick and easy! Even if you’re not in the military, you can still follow these steps to get a quick but efficient shave every morning.

Of course, the whole shaving experience can be made even more comfortable with the proper set of tools.

Here at Naked Armor, we pride ourselves on crafting world-class quality straight razors which give the closest shave ever.

Designed as a hybrid of the full hollow and half-hollow, our razors offer the best of both designs. They give a clean and close shave, whether you’re in a hurry or you want to shave at leisure.

When we sponsored a Naked Armor shaving kit to a lucky Navy veteran during a Veteran’s Day Celebration, he loved it so much that he couldn’t wait to try it. That’s how good our straight razors are.

If you want to check them out, visit our site for the complete inventory.

How to Prevent Razor Bumps
Which Razor is Best for Sensitive Skin?
The Bela Straight Razor: A Joy To Be Held

Here’s Why We Don’t Have Bearded Presidents Anymore 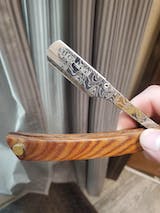 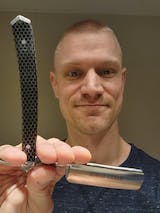 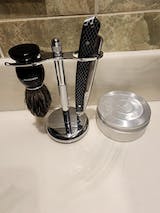 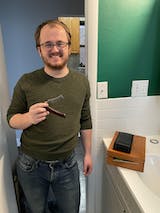 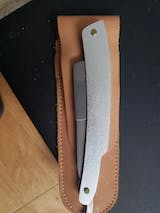