The EPA has estimated that there are at least 2 billion disposable razors which are thrown into the landfill every year. 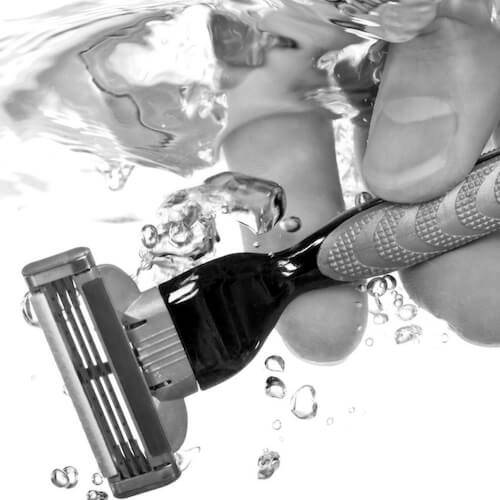 We don’t really realize it, but plastic razors are probably the most wasteful accessory on our bathroom sink.

Sure, there are plastic toothbrushes, hand-wash bottles and soap boxes but nothing beats the plastic razor in terms of how quickly it often needs to be replaced.

The average American male over the age of 15 shaves about five times a week.

Assuming that he uses a disposable razor, that’s a whole lot of razors that are disposed on a monthly basis. 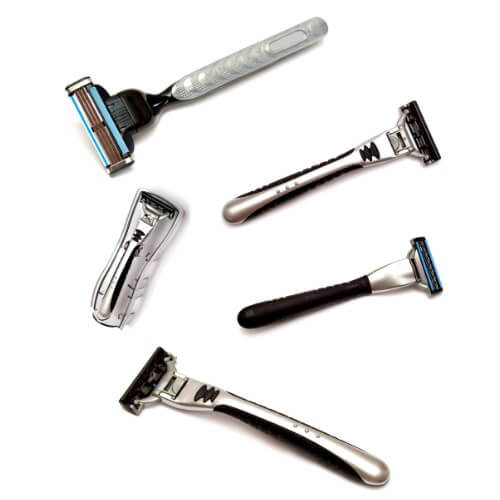 Industry statistics show that in 2017, there are some 161.2 million Americans who used disposable razor blades/shavers for their regular shaving routine. As a single-use plastic product, it doesn’t come anywhere near plastic bottles and wrappers in terms of ubiquity but it certainly ranks among the top ten plastic products polluting our environment.

In fact, the EPA has estimated that there are at least 2 billion disposable razors which are thrown into the landfill every year. That’s how much we have become dependent on these disposables because they are convenient to use and easy to dispose.

Except for one major fact: it’s not really being disposed of. 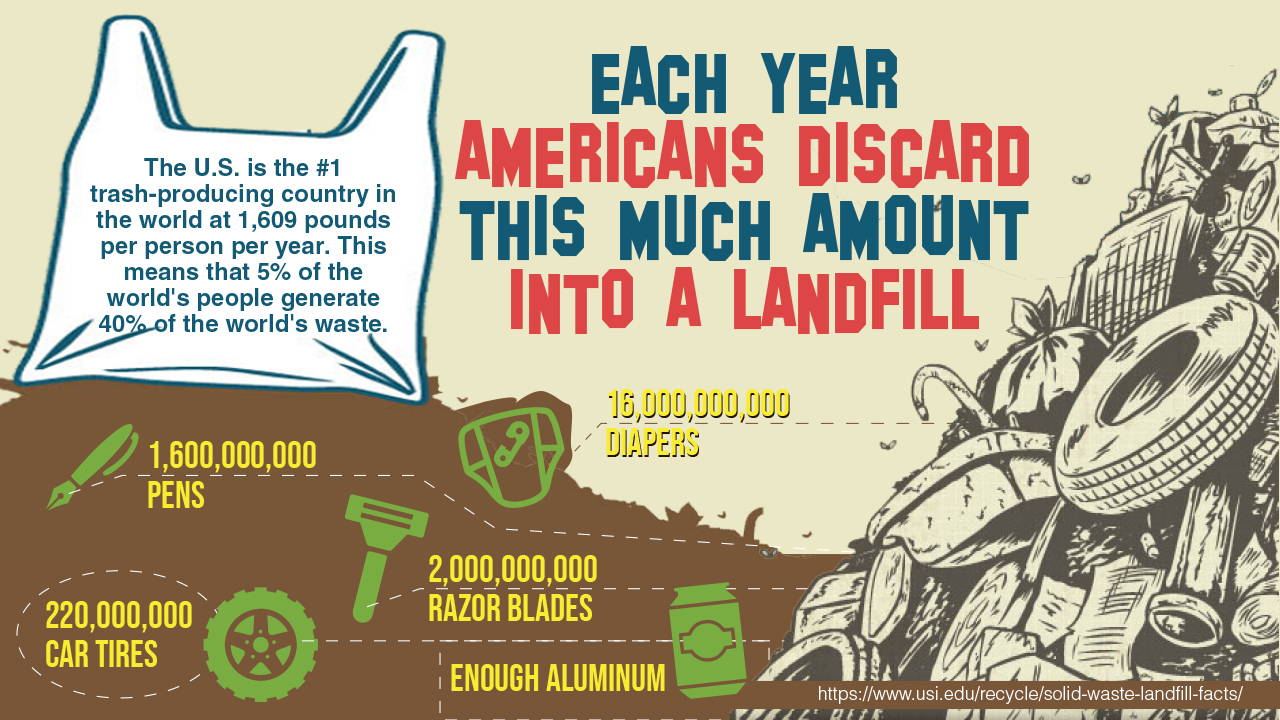 The Rise of the Plastic Razor

The first completely disposable razor was developed in 1975 by the French company Société BIC. When it was released to the market, it became a runaway success, threatening King Camp Gillette’s monopoly in the shaving razor market. Gillette, who developed the safety razor, had made a fortune from selling cheap disposable safety razor blades to consumers.

But the plastic razor changed the market.

Made of polystyrene, the disposable razor was inexpensive and very convenient to use. Hence it appealed to the consumers who could not be bothered with regularly changing the blades of their safety razors. Seeing how popular the product was, other companies followed suit-including Gillette - and now, the plastic disposable razor market is a $3.7 billion industry, with Gillette capturing more than 65% of the market.

Economics of the Plastic Razor

It helped that Gillette had an ingenious plan to market his razor. He sold the consumers cheap razor handles, and then recovered the profits by selling them expensive cartridge refills. It’s a marketing recipe that’s still being used today, accompanied by advertising gimmicks.

And guess what, it worked. Because of this, the razor industry is one of the most profitable consumer markets in the world. In fact, it goes by another term now: male grooming, a $17.5 billion market that is projected to reach $60.7 billion in 2020.

And yet the reality is, what sure looks like a good buy, isn’t really. Sure, the cheapest 12-packs are being sold at under $3 but considering that a razor cartridge only lasts a week or two before it gets dull, you’ll end up spending more on refills by buying expensive cartridges on a regular basis.

Here at Naked Armor, our product line of artisanal safety and straight razors has been crafted with the goal to minimize the carbon footprint during its production processes.

The inescapable fact is, plastic razors contribute to the worsening problem of plastic pollution worldwide. By itself, it doesn’t do much, but when you think of it in terms of how large the cumulative effect of 1.3 billion men shaving daily in America alone will impact the waste disposal system, then you should have cause to worry.

And one does not even have to look far in order to see evidence of it.

Off the coast of California floats the Great Garbage Patch, a floating island of plastic junk the size of Texas. It’s where most of the plastic junk that finds its way to the ocean accumulates. It’s not overreaching to say that that’s also where our plastic razors go to when they get dumped in the oceans.

Scientists are now discovering that it’s growing faster than anticipated, with estimates now pegged at sixteen times higher the previous number. And that’s not the only garbage patch floating around in our backyard.

All over the world, plastic garbage patches are slowly accumulating because of our insane demand for plastic and our inability to dispose of them. If we can’t overcome our dependence on plastic, we might be looking at a future where we will be overrun by plastic.

So What is the Alternative?

Ditch the plastic razors and go for a safety or straight razor.

You might scoff at the suggestion to go back to the traditionalist roots of wet shaving. But when you think about it, using a safety razor or a straight razor is more sustainable and eco-friendly because: 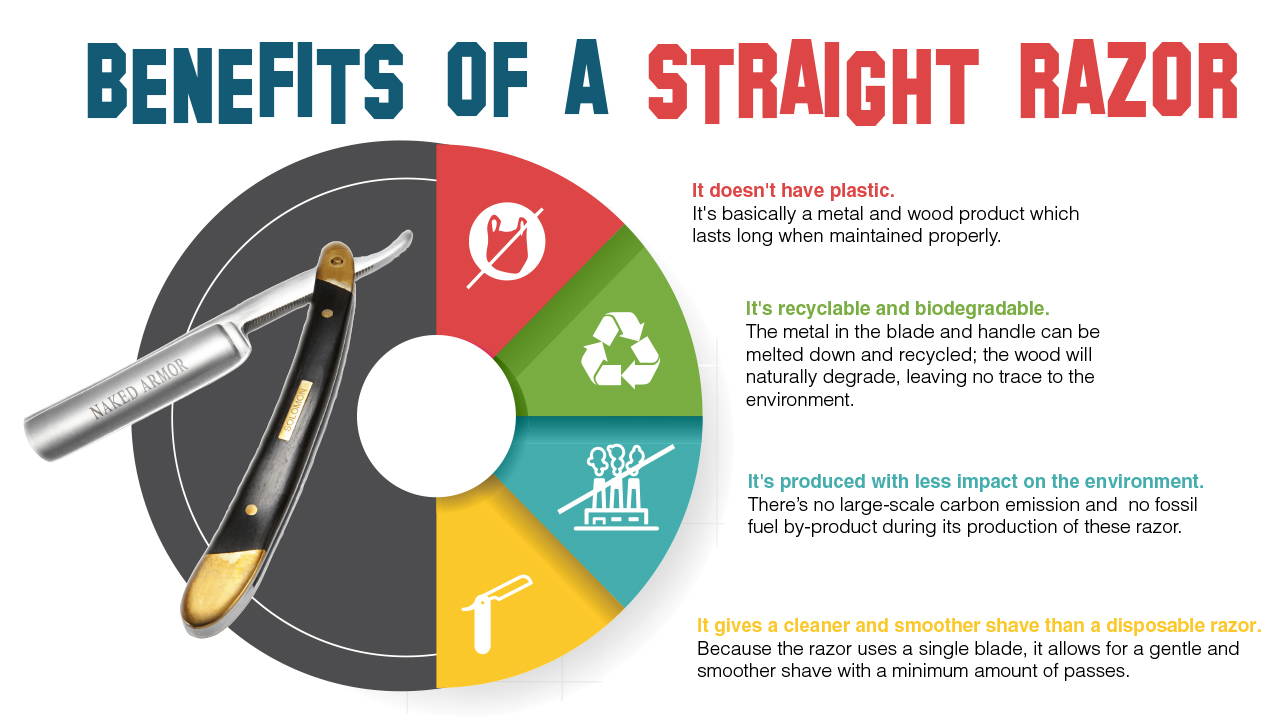 Here at Naked Armor, our product line of artisanal safety and straight razors has been crafted with the goal to minimize the carbon footprint during its production processes. It’s a one-time quality investment that will help you cut down your costs in razor supplies.

Our razor blades are made with high-grade quality Japanese steel, with durable wooden handles sourced from sandalwood, one of the world’s most valuable timbers.

When you buy one of the razors, not only are you reducing your own plastic footprint, but you are also giving yourself a luxurious experience that only a Naked Armor razor can provide.

So why use a plastic disposable razor when you can help save the environment by getting a real razor. Click Add to Cart now.

FIVE ALTERNATIVES TO A DISPOSABLE RAZOR 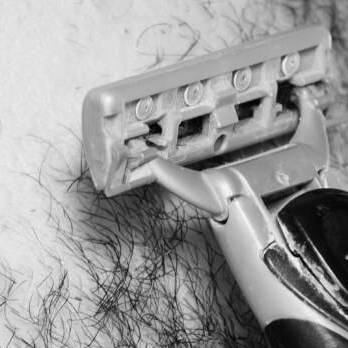